Hit enter to search or ESC to close
HousingInvestingKiwisaverMarketsMortgagesNewsUpdate

The Covid-19 viral outbreak is the major theme dominating sentiment and performance and will continue to be for sometime. Globally, governments are imposing stricter and more severe quarantines in order to contain the disease, which is expected to lead to materially impacts GDP growth and have ongoing economic repercussions. Government and central bank responses have been swift, however, with significant – and unprecedented – action being taken to help mitigate economic fallout.

It’s worth saying also that investment performance is a moving feast right now. In the last 48 hours we’ve seen the US Fed unleash the full power of its balance sheet in providing monetary support; this evening we’ve seen the US Senate pass a 2Tn stimulus bill designed to provide massive economic support for businesses and families. As a result, the Dow has had the best 1-day jump since 1933, and equities markets from the NZX and ASX through to Asia and Europe are all posting record gains as well. Thats not to say this is over! Far from it. Expect to see ongoing volatility until the outlook becomes more certain.

US S&P 500 over the last six months – note the high level of volatility since late Feb:

Global equities have experienced their largest and fasted drop in value in history. US equity markets are down around 30% from their February peak; European markets are down a similar degree, Apac markets range in declines from down 10% (Shanghai, which is starting to come off the back of the outbreak) to down 35% in the case of Australia.

Bonds have been up and down. Initially, yields declined rapidly, providing some support for balanced portfolios. However as the crisis deepened, even US treasury yields started to spike, with investors either fleeing to cash, or being forced to liquidate fixed-income assets in order to satisfy margin calls and redemptions (or target allocation). With the Fed stepping in with increasingly aggressive easing operations in a range of credit markets, fixed income yields have in the last several days started to stabilise and decline again. 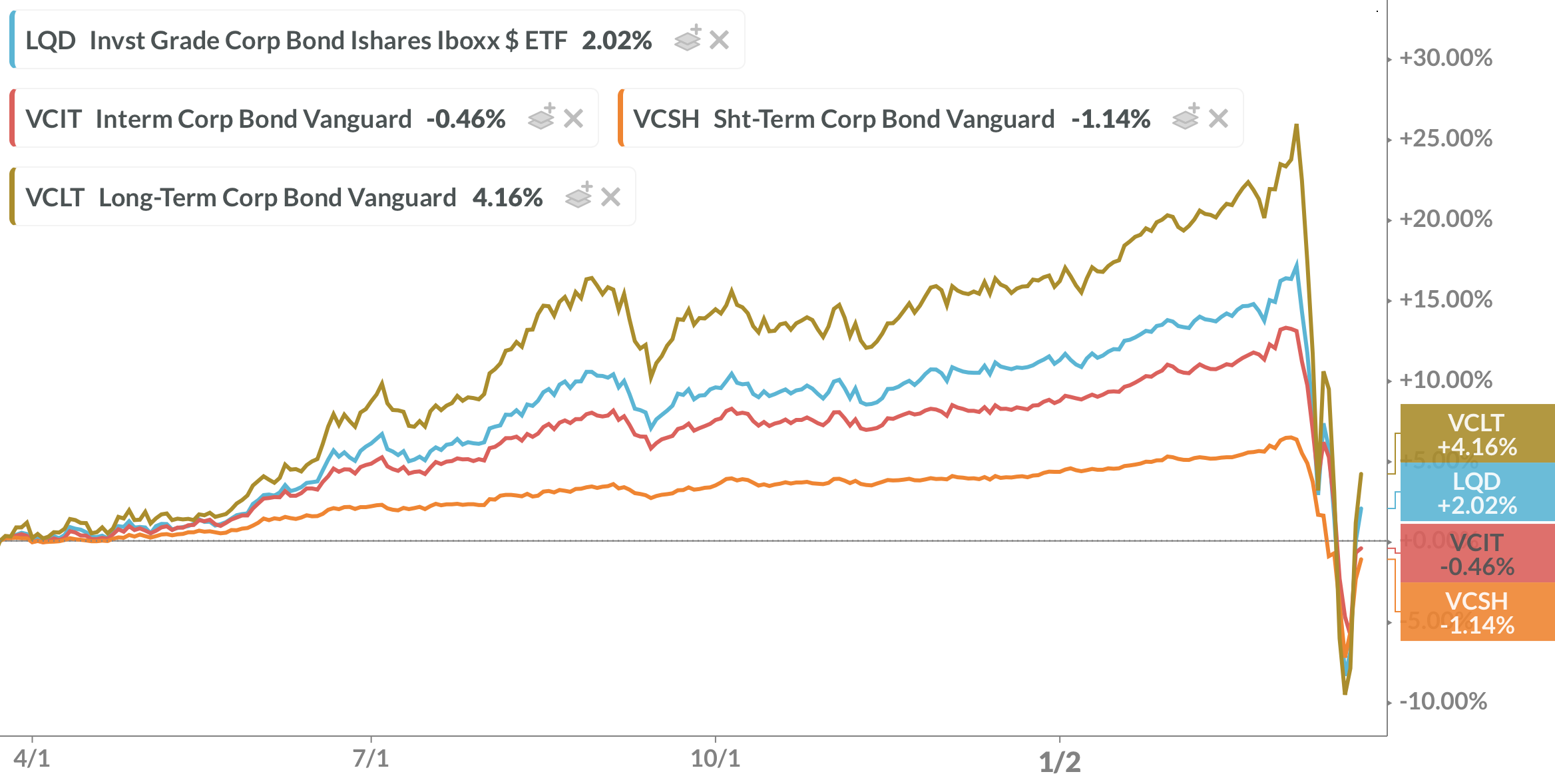 US Treasuries saw a worrying jump in yield last week, but have declined since the Feb aggressively stepped up its quantitative easing operations and committed to uncapped bond-buying if necessary. 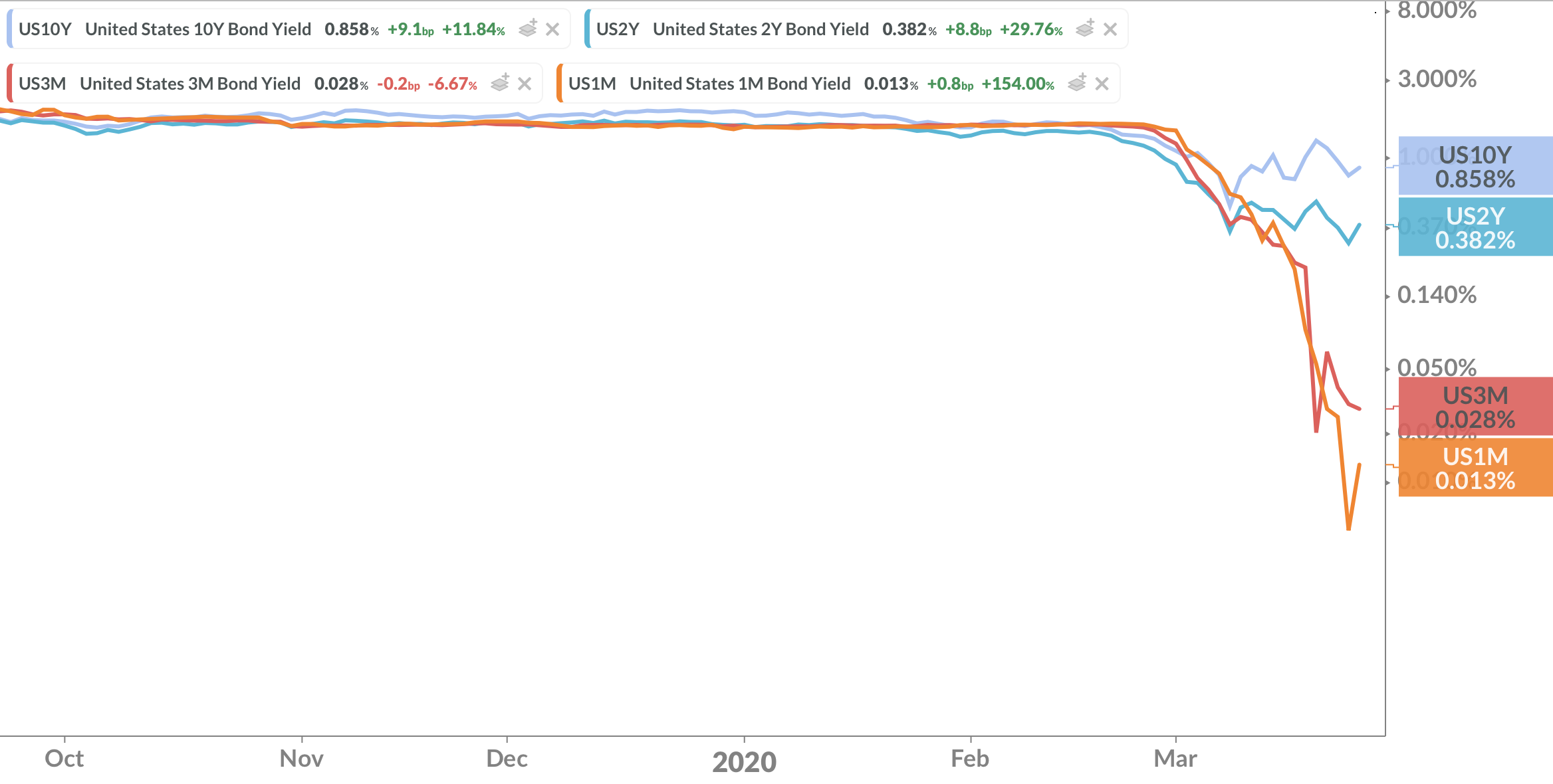 Growth focused portfolios will have seen materially larger declines in value than income focused portfolios, but income portfolios have been hit as well. Be aware: things may well get worse before they get better (this goes for Kiwisaver assets as well) – but the only surefire way of losing money right now is selling out while we’re in a downturn.

Synergy performance reports are updated quarterly and the last update is as of February 2020, which is now clearly well out of date. I’ve included these figures here are a guide (they capture some of the early declines in markets but obviously not all of it):

I have a call with Dimensional on Thursday the 25th and will update after that. At this stage funds are performing broadly in line with their indexes. We’re watching bond funds closely right now as global moves to cash increases yields on corporate bonds and long-dated US treasuries. At this stage (particularly after the Fed announcement to provide liquidity support) we’re not anticipating any issues with these funds on a systematic level, although do expect a period of heightened volatility.

Funds from Vanguard, Blackrock, and locally Harbour and AMP are likewise performing roughly line with benchmarks. Generally funds employed with clients are passive and / or index funds and these have all performed as expected. Over the next few posts we’ll share more specific performance data on key funds as is relevant to most clients.

Booster Geared Funds are down significantly (approximately 36% from peak in mid-Feb) as would be expected with all-equity funds. Gearing levels were at lower limits pre-crisis (approx 0.2x) and leverage is operating within expected parameters. I’ve been in reasonably close contact with Booster over the last two weeks as they have been managing through the downturn and so far have good confidence that values with lift in line with market as conditions improve. Due to the effect of gearing, this funds tends to be more volatile than most – this will pay off when the recovery begins (the Geared Growth fund returned 32% in 2019 – nearly 10% ahead of benchmark).

Other funds (Booster asset class, SRI, moderate and conservative funds; Generate funds, and Superlife custom portfolios) impacts are as expected: equities-heavy (growth, aggressive funds) are down heavily, moderate down but less so, conservative and cash funds are flat on the year after recent days recovery in corporate bonds.

As a note, the FMA has published a good piece on Kiwisaver volatility and why you should stay the course with your funds.

Mortgage rates are crashing down, floating rates are down by the full OCR cut of 0.75%, and this has been passed through in full – this is now starting to flow through to existing borrowers. Term rates are also starting to come down, with most 1 and 2 year rates sitting at around 3.05% (ratecard) Term rates are driven by swap markets which are heavily down, so the banks have more margin to play with here. The government and RBNZ have also effectively provided a guarantee for residential mortgage lending in the short term, meaning that any borrower under pressure from the affects of Covid can apply for a six month payment holiday (or interest-only payment arrangement).

Property prices remain to be seen – with the lockdown, the property market has ceased to exist: there literally is none, as buyers and sellers are physically prevented from making exchange. I expect short term impact as buyers hold back, however the mortgage holiday has effectively ensured that sellers will remain unstressed in the medium term. Property has proven to be a resilient asset in NZ over the years, so I’ll be watching this with interest. My sense is that brave (or long-term) buyers are going to be in a good position near term to pick up some deals, but at this point I’d expect to see softness throughout the year, rather than sharp declines. This could easily change if the crisis drags on for materially longer than expected and owners start to reach the limits of government-based support.

In general insurers are expecting to hold up okay. With some exceptions they’re continuing on a business as usual basis, with the obvious change to working remotely. While they’ve all signalled some degree of impact to service levels in the short term, insurers are all expecting to weather the crisis relatively unscathed.

Has taken the step of limiting the types of policies they’ll issue for new clients from today. They have indicated this is purely a precautionary measure at this stage and do not expect any impact at all of normal application, claims processing, or ability to pay claims. Any client who is expecting difficulty maintaining premiums can contact me (or Partners directly) to discuss payment relief options.

AIA, Sovereign, Asteron Life, and others

Have all been clear that they’re not expecting Covid to stress their financial position or compromise ability to pay claims. Any existing coverage will cover Civid-related claims, and insurers generally re-insure for specific events such as pandemics. Insurers have all activated their business continuity plans and are processing claims and applications as per normal. And likewise all insurers have premium relief schemes if necessary.

These are clearly highly uncertain times, and we don’t yet know how long the lockdown will last, what the economic impact will be, or how badly New Zealand will be affected from a health and financial point of view. As we continually remind ourselves: be kind. I’m here to help; reach out as you need to (keep in mind I’m getting pretty busy right now too!), and focus on the long term.