Hit enter to search or ESC to close
CashflowDebtMarketsNewsPlanning

Now that we’re confirmed in lockdown for the next 4 weeks at least, I’m going to try and keep these updates coming at a more regular than normal pace. Things are clearly changing on a daily basis, and in general the situation remains highly fluid. I hope to bring a balanced view of the financial situation (obviously I’m highly unqualified when it comes to medical matters), and I’m also going be providing more specific data on how the assets and financial services my clients are dependant on are performing. I’m also posting a more live running commentary on instagram here: @tmsalmen

What should I be doing now?

In the short term, your focus should be on these few things first:

For existing clients, I’m prioritising anyone who needs support with the above. Email or call me to arrange a time to talk – I’m on call and available for VC as well. I’m also thinking about what I can do to provide support to those who are not currently clients in a more focused, cost-effective, and targeted way – possibly providing on-call support for a fixed fee to help anyone who needs advice and assistance navigating through things in the short term. If anyone thinks this might be of value or has thoughts on this, please let me know.

What has the response been?

I also want to share some historical facts that will hopefully help provide some context to what’s happening at the moment. Below is a chart of the S&P 500 index in the United States, which is a good proxy for the value of the largest 500 companies in the US over time: 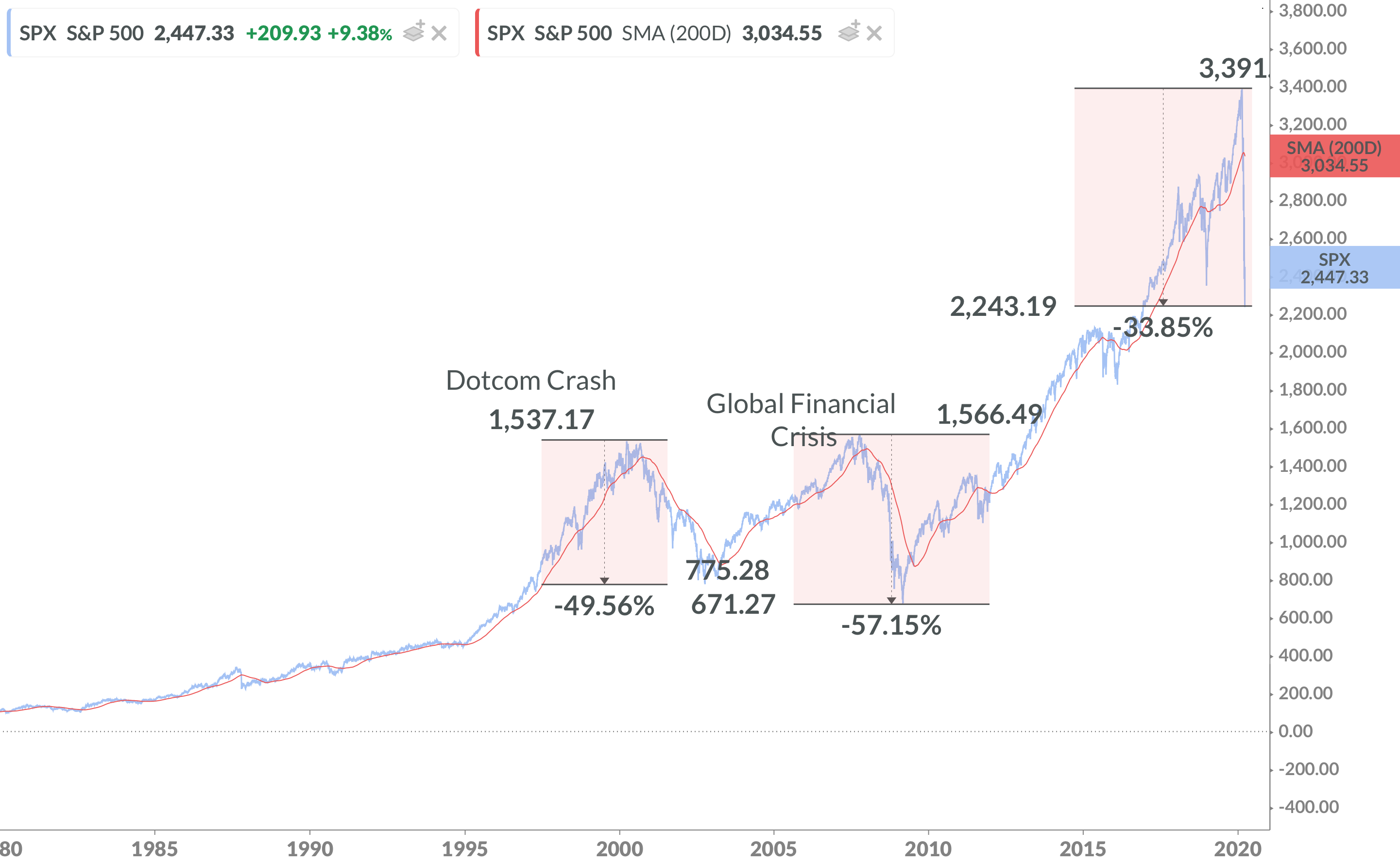 I’ve highlighted two of the most significant events in the last two decades; the tech crash of 2000, and the global financial crisis (I’ve picked these because they had such a major impact on equity markets). In both instances, sharemarkets fell by at least 50% from peak to trough. My message is simple: financial markets will recover, the economy will recover, property markets will recover. Things may get worse than they are now. However: central banks, central governments, local governments, and communities around the world are doing a great deal right now to contain the outbreak, support financial markets, minimise economic impacts, and shorten eventual recovery times.  In the US, for example:

The New Zealand Government has announced draft of measures, with more to come:

In Australia the RBA has cut rates; QE has begun; the government has announced a raft of financial support packages for homes and businesses; and retail banks are offering mortgage support packages and lines of credit to small businesses.

At this stage the main issue is extreme uncertainty. Markets are big risk gauges, essentially – risk drives decision-making at a core, fundamental level. And when uncertainty is high, like now, investors become risk adverse – and flee into low-risk assets such as cash and government bonds. The big unknown at this stage is how long and severe the downturn will be – and the impact on GDP. Earnings is the engine and right now earnings are stalling and disappearing.

What have the impacts been in financial assets and services?

I’ve posted a snapshot of the current status and performance of the various investments, assets, and products that we use with clients here.

Where can I find more information or support?

I’ll be posting regular updates on this site. You can also subscribe for email updates here, and you can reach out to me here for a discussion about how I can help with your financial position.